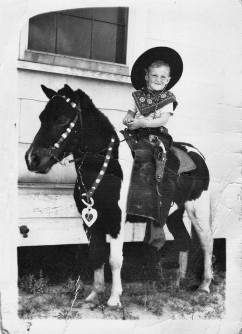 Most people my age or 10-15 years younger tend to have at least one of these photos. In my research I have determine that for 10-15, maybe 10-20 years this was done all over the country. No Internet in those days so the primary forms of advertising was newspapers and radio and a little television the latter half of this phenomenon. Of course, after the end of the way and a lot of kids being born (the baby boomer generation), this turns out to have been marketing coup for the guys and gals doing it. Just think what a draw that little Shetland pony was everywhere it went. I personally don’t think that they had to do much advertising. The Shetland Pony was the draw. These guys primarily used 5×7 sheet film and cameras. That means that they didn’t need to travel with much in the way of a developing lab. The prints would be contact prints (see an example of a contact printer below) directly from the 5×7 negative which could have been done right in a hotel/motel room. Additional equipment and supplies would have included chemicals and trays. I don’t think they ever offered enlargements or “package” deals with so many of each size, etc.

I just figured that it took a substantial amount of travel and the photographers were pretty nomadic as opposed to working just one area. I bet they were very interesting people to get to know. One thing that I’ve heard is that they were nicknamed “The Kidnappers.” Not because they actually kidnapped the kids, but because of the attention the Shetland Pony caused and I can imagine many a kid wandering off to get their photos taken. The photographer would take the photo without permission of the parents in many cases then ask the child where he/she lived and then he would show up with the print in hand to try and sell it to the parent a day or so later – and in many cases the parent(s) didn’t even know the photo had been taken.

Other than finding loads of the photographs, I have NOT been able to find any significant amount of information on the Shetland Pony Photographers. I would even be interested in finding out what happened to all the ponies. There must have been tens of thousands of them. Where were they kept at night. For all I know the photographer got a double room and put the pony in the second bed – just kidding of course, but where did they keep the ponies at night – maybe in a live stock trailer?

Again, I would be very appreciative if anyone can help point me in the right direction with links, etc. …and if luck would have it, I would love to find a couple of the photographers and interview them for my personal enlightenment, but who knows – maybe there is a book in this somewhere. I did do a book search on Amazon.com and Barnes and Noble without any luck.

After additional research:  It is all so sketchy. Most of it is opinion and assumption based on people who were primarily customers and kids at the time from all over America posting the Shetland photos. From that you pretty much can assume that they were, in fact, nationwide since they come from all over the country. …but as to who, how, we know when, where, etc. they were based out of or if they were all independents going with the idea, or worked for an Olan G. Mills type organization I have no idea. …and like the tidbit on “The Kidnappers” may have been just one localized area – all I have to go on is one person’s view of what they were nicknamed in his/her area of the country.

When I was a more active photographer, I was a member of the PPA so I may be able to contact them and see what they have on the Shetland Photographers. I was planning on calling them on Monday. I didn’t think of it until after their offices were closed for the weekend.

What I would love is for some of the living Shetland Photographers or family members would give me a shout and some information about them. It is very possible that at the end of the war (and it may have started as early of the 1930s driven by The Great Depression as an innovative way to make money without becoming a street corner beggar. If that is the case, they deserve much admiration for their desire to get ahead on their own. Then after the war, millions were getting out of the service and people were hungry for jobs so that very well could have driven the phenomenon as well.

At any rate, it is intriguing and I do hope that I am able to gather more information on them As I do I will add it to the note.

In the last 24 hours I received a photograph from a person I know who had his photograph taken on the very same Shetland Pony that me photo was taken on. Check out the follow at the following link.